Being somewhat of a fan of stats and data I was looking through my SOUNDCLOUD to see how the new singles I uploaded in 2016 were performing among the community of listeners who follow me on there.

As I was clicking through the data something jumped out which was a tad unusual in the figures, a remix I did of ‘SETTLE THE SCORE FT. KYLIE AULDIST‘ by Australian group COOKIN’ ON 3 BURNERS from 2009 was rapidly becoming one of my MOST STREAMED TRACKS OF 2016. 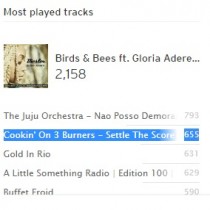 Why you may ask? (As I asked myself!) Well, the track ‘THIS GIRL‘, also originally released in 2009 by the group, was given a rather jolly 2016 house remix by French producer KUNGS, and in the process has been topping the singles charts across EUROPE (Number 2 in the UK, Number 1 in FRANCE &

GERMANY)* since it began receiving mainstream support from February of this year on the radio and various social networks.

While I am not immediately privy to current downloads and streaming information (Kudos Distribution & Freestyle Records hold that), I can deduce from my own data that my remix has had 22.9% MORE STREAMS IN 2016 (ALREADY!) THAN 2015 AS A WHOLE (285 in 2015 – total – and 655 up to from Jan 1st 2016 to 11/07/16) on my SOUNDCLOUD with the UK, FRANCE, NETHERLANDS & GERMANY (places where ‘THIS GIRL‘ topped the singles charts) being the most popular place where listens have arrived from.

I concluded that this must be one of the ripples off success being felt from the splash of pan EUROPEAN SUCCESS of ‘THIS GIRL‘, which presumably has piqued an interest in all things COOKIN’ ON 3 BURNERS, as there would be no other immediately obvious reason why people would investigate a remix I did 7 years ago. In fact, more likely, there would be a decline or outright flat line at this point in terms of streams given we are so far away from the initial release of the remix in 2009.

To listen to said remix (and thus distort the figures!) check it out at my SOUNDCLOUD – HERE!!