Diesler‘s first release was Cotton Wool, part of Tru Thoughts Shapes One compilation: despite being written when he was only 20, the song still found its way onto Radio 1,a massive achievement for a debut track. This success was followed with the Ladies and Gentlemen Get Your Engines Ready EP in June 2004; a mixture of smooth, laid-back vibes and up tempo beats, from jazz and funk to Latin rhythms, it showcased Diesler‘s globe-trotting sound, and magpie-like ear for the best samples, to devastating effect. 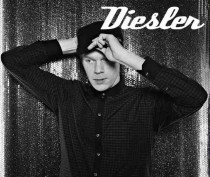 He followed that up with his debut album & double vinyl EP releases Diggin It Somethin  Rotten in April 2005 and a calendar year later with Keepie Uppies, both of which are on  the Tru Thoughts label. His 3rd album, The Rhythm Station, was released in October  2007 on Freestyle Records and a remixes compilation, ‘Tracks On The Rocks‘ in  2009. His 4th Diesler LP ‘Tie Breakers‘ was released on Social Beats/Unique in  2010.

The Rhythm Station, was released in October 2007 on Freestyle Records and a  remixes compilation, ‘Tracks On The Rocks‘ in 2009. His 4th Diesler LP ‘Tie  Breakers‘ was released on Social Beats/Unique in 2010.

Away from the studio Diesler has been putting the miles of late making DJ appearances at Festivals both in the UK, Europe & Japan, from UK super clubs Chibuku Shake Shake (Liverpool) & The End (London) to many respected club nights across the world. Also this year he puts the 8 piece band, ‘Diesler Live Experience‘, on the road performing tunes from the Diesler catalogue.

In addition to all his original work Diesler produced 2 songs for Tru  Thoughts vocalist Kinny on her ‘Idle Forest Of Chit Chat’ LP and has worked on the  soul project ‘Laura Vane & The Vipertones’ whose debut LP came out in August 2009  gaining support from Jonathan Ross, Mark Lemarr & Craig Charles (BBC Radio,  UK).

In 2011 Diesler spread his musical tentacles further into writing, including an electronic  project with Tru Thoughts producer Azaxx under the moniker Monster Sneaker. Releasing a remix EP from the ‘Tie Breakers‘ LP. Djing jaunts have included visits to Switzerland, The Netherlands and Dubai plus remixing duties for Switchstance Records‘ act Deela.

Diesler provided executive production to the Record Kicks group Hannah Williams & The Tastemakers on their debut LP ‘Hill Of Feathers‘ which was released in October 2012 in Europe & Japan. 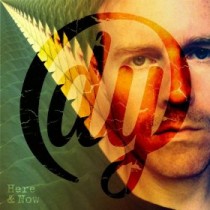 The Diesler co-produced album ‘Life In The Slow Lane’ with vocalist and long time  collaborator Double Yellow was released on London label Here & Now Recordings in  November 2012 to great critical response. An EP from the project earlier in the year, which featured remixes  from Yam Who? & Phase 5 Stereo gained support from Gilles Peterson, Bill  Brewster, Joey Negro & Danny Krivit.

In 2013 Diesler & Jung Collective formed the Buried Treasure record label. The vinyl based imprint kicked off with the tracks ‘You’re Not Dead‘ from Diesler & Double Yellow and ‘Gubz Rub’ of the Hugh Turner Quartet tune ‘Back To School‘.

The project with Azaxx, Monster Sneaker, returned for a 2nd release on A Little Something Recordings in the shape of the cleverly titled ‘Azaxx & Diesler Present Monster Sneaker Vol. Two‘ which also features the vocal talents of Colonel Red once again and Diesler Live Experience vocalist Katie Miller. 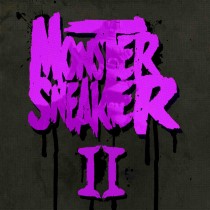 DJ wise Diesler joined Simon Ham for a monthly night at Soup Kitchen called You Dig? – which spawned a monthly podcast too – as well as paying visits to The Mojo Club in Hamburg & The Plug in Sheffield. 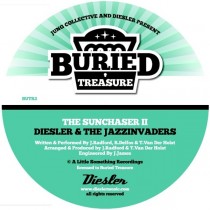 In July Buried Treasure produced their 2nd release in the shape of the commercial and critically praised Diesler & The Jazzinvaders – Sunchaser II & Asterion ft. Neil Cowley – I See [Revbjelde Edit].

From this success the Buried Treasure gained a distribution deal with French company Modular to release music across Europe & Japan physically and worldwide digitally.

In 2014 You Dig? begun their ‘Basement Takeover‘ nights with Renegade Brass Band being their first live act in January and Dom Servini & The Gene Dudley Group from Wah Wah 45s joining them in April. Diesler began a monthly radio show entitled ‘Shelf Life’ on 103.2 Preston FM along side The Vinyl Miners (Bodie & Fraser) the 3rd Thursday of each month which ran from January to June 2014.

Diesler took up a label manager role at London label Here & Now Recordings on January 1st where, under his tenure, they released the critically acclaimed ‘Suite Shop’ by ‘Ambient Jazz Ensemble & Funk, Soul & Afro Rarities : An Introduction to ATA Records. 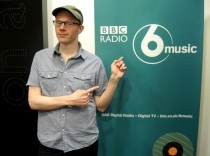 Along side his podcast work Diesler began contributing to the Craig Charles Funk & Soul Show on BBC 6Music in the shape of the monthly ‘6 on 6 in 6‘ mix feature culminating with a special guest mix on the New Years Eve broadcast.

At the start of 2015 Diesler kicked off the year with a 15 track CD compilation inspired by his podcast entitled ‘A Little Something Radio : Music From The Modern Soul Underground‘ on Here & Now Recordings.

Since 2016 Diesler has been releasing singles with a range of great producers on his very own A Little Something Recordings imprint – including his 5th studio album Sounds Familar in 2016 – as well as scoring some high profile synch on TV programs on HBO, Netflix & the BBC. 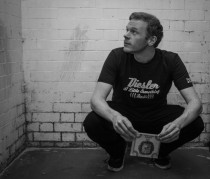